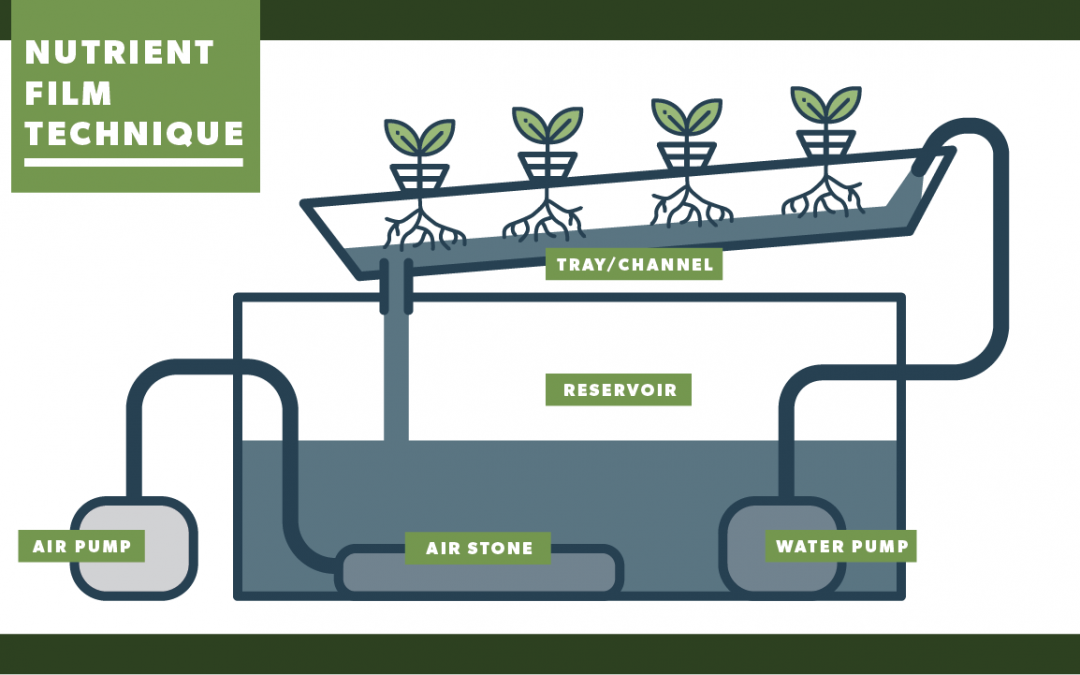 The nutrient film technique (NFT) has a lot of benefits that make it very popular amongst commercial and DIY growers alike.

This technique has a lot of great benefits for growing leafy greens!

In this article, you’ll learn the benefits of nutrient film technique hydroponic systems, but first, let’s go over the basics of how it works.

In an NFT system, the crops sit in small openings on top of an enclosed channel.

Pumps draw nutrient water from a reservoir and push it into the channels.

The channels sit at an angle, so gravity draws the water down the channel and through the plants’ roots.

Once it reaches the other side of the channel, the water drains out.

Then, the water ends up back in the reservoir, ready to be used again.

Only a little bit of water is released through the trays at a time.

Very little water passes through the plant roots at a time, so it’s more like a film of nutrients than flowing water.

The Benefits of NFT Systems

In NFT systems, very little water passes through the plant roots at a time.

Plus, it’s a recirculating system, which means the water that is pumped out of the reservoir is captured and reused.

Because it’s able to collect and reuse water, it needs significantly less than systems that use new water every single time.

Some hydroponic systems aren’t suited for vertical farming, because of weight or size.

As a result, it’s easy to save space and grow more per square foot with an NFT system.

Most nutrient solutions use salt-based minerals, so any nutrients the plants don’t absorb will be left behind and build up over time.

As the salt builds up, it can interfere with the nutrient solution and cause problems for your plants.

But NFT systems are constantly running water through the system, so salt cannot accumulate in any one spot for too long of time.

Most hydroponic systems require using a growing medium to support the plant’s stem and roots.

But most of the time, NFT systems don’t use a growing medium. So, that is one less expense you need to pay for to run your hydroponic system.

Plus, because the NFT system uses so little water at a time, you won’t go through your nutrient solution as fast, letting you save money on it too!

The benefits of the nutrient film technique are so strong, we even use it in some of our Pure Greens Container Farms.

If you want to learn about another great hydroponic system, check out our recent article, “The Benefits of Deep Flow Technique (DFT) Hydroponic Systems.”

And to learn more about hydroponic farming, visit our website or call 602-753-3469 for more information.